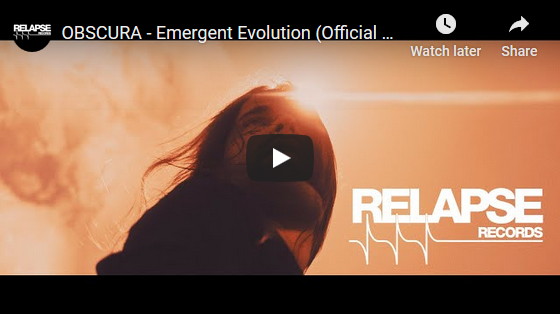 “With the production of “Emergent Evolution” we just released the, up to this date, most ambitious music video of Obscura. Earlier this year, the entire team flew to Sicily for a week to capture astonishing shots on top of a volcano, in the middle of sulphur springs, within lithified lava streams and inside of natural vaults. We knew this video turns into something unique and special when we sorted the raw material months ago. “Emergent Evolution” exceeded our expectations by far!” – Steffen Kummerer

OBSCURA’s fifth studio album Diluvium is out now on CD/LP/Digital via Relapse Records. Physical packages are available via Relapse.com HERE and Digital Downloads / Streaming Services AT THIS LOCATION.

A full collection of OBSCURA music videos is available via YouTube HERE.